Bexhill Museum was opened in 1914 thanks to the instrumental support of the Reverend J.C. Thompson FGS and Kate Marsden FRGS. Rev.Thompson was Hon Curator until 1924. The collection was housed in the Egerton Park Shelter Hall, built in 1903 as a small entertainments pavilion for park visitors to the park. The local authouity leased the building to the museum and provided a small grant for its running, which it still does today.

Our longest serving curator, Henry Sargent, started work at Bexhill Museum in 1920 and remained in post until his death in 1983. The museum’s governing body, the Bexhill Museum Association, was founded in 1923.

The collections built up by Henry Sargent were largely in the fields of natural history, geology and archaeology. Mounted birds were extensively collected and came to dominate the early displays, alongside table cases of stone tools and local fossils.

When Sargent died in 1983 the Museum would have closed had it not been for a small group of volunteers from the Bexhill Museum Association, who kept the building open and persuaded the local District Council to continue to support the Museum.

In 1986 Rother District Council appointed Stella Bellem as a professional curator for the district, succeeded by Brenda Mason In 1990 and then Julian Porter in 1995, who continues in the post to this day.

The Museum remains independent and continues to develop with the support of devoted volunteers. If you would like to make a donation, volunteer or join our parent organisation, Bexhill Museum Ltd, please visit our Support Us page.

Bexhill Museum is managed by Bexhill Museum Ltd, a volunteer run registered charity (1102638). Our aim is to provide a museum to promote, improve and advance the education of and to generally benefit and entertain the public.

Meet our terracotta zoomorphic roof finial, having a bad day for over 700 years. It originally comes from Weoley Castle.

Free download and use as you wish, perfect if you fancy a new head in hands profile pic! #openaccess https://t.co/dCZjW0S9Ev 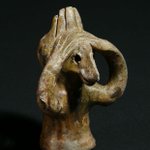 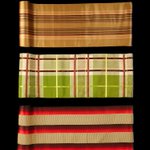 A 1,900 year-old Roman birthday invitation with the earliest known writing in Latin by a woman (bottom right). From Claudia Severa to Sulpicia Lepidina, wife of the prefect at Vindolanda Roman Fort on the northern frontier of Britain. Excavated in 1985. Ink on wood. 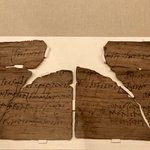 Our #ObjectoftheDay is this Meroitic carved stone block, depicting the #goddess Isis! 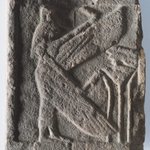 "... is more like a large grass mouse than a rat. It has two distinct populations in eastern Africa, one in Somalia, Ethiopia and Sudan and one in Tanzania (and maybe also Kenya)." #TinyEgyptTuesday is coming straight to you from the @McrMuseum stores today.

Here's the next few sessions sorted - amazing amulets usually on display in the gallery. 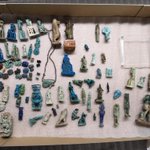